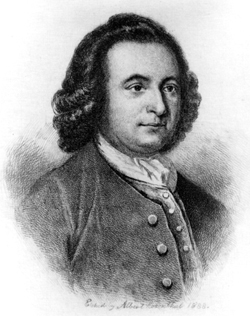 "The fact is unquestionable, that the Bill of Rights, and the Constitution of  Virginia, were drawn originally by George Mason, one of our greatest men, and of the first order of greatness."
Thomas Jefferson, friend and contemporary of Mason

The name George Mason is not one that many Americans outside our region would recognize, but the place of George Mason, the man, in our nation's history is of immeasurable importance.

Mason was a plantation owner whose residence was Gunston Hall, a handsome Georgian brick home located in close proximity to Mount Vernon, former home of George Washington, a neighbor and close friend for all but the last years of his life. A prominent figure in his home state and one whose counsel was greatly valued by others of his generation, Mason was the main author of both the Virginia Declaration of Rights and the Constitution of Virginia.

As a delegate to the Constitutional Convention, Mason refused to sign the Constitution and lobbied against its ratification in his home state, believing the document as drafted gave too much power to a central government and was incomplete absent a bill of rights to guarantee individual liberty. His dissent arose in part, too, from what he perceived as the Convention's reluctance to deal more harshly with the institution of slavery (although he himself held slaves).

Mason's refusal to sign the new Constitution cost him greatly, as he lost the friendship of Washington and others over his refusal to endorse the document in its final form. His refusal cost him his rightful place in the annals of history to some extent, as well. Mason is sometimes referred to as the "Forgotten Founder," largely ignored by history books and often uncredited for originating many of the core concepts and much of the language later incorporated in both the Declaration of Independence and the Bill of Rights.

Mason's efforts to ensure a protection of individual rights ultimately came to fruition in the year prior to his death with the passage of the federal Bill of Rights on December 15, 1791, providing the first ten amendments to the Constitution.

In a forward to Robert A. Rutland's book George Mason Reluctant Statesman, Dumas Malone has this to say about Mason's contributions:

He was the author of the Virginia Declaration of Rights, which was adopted three weeks before the national Declaration of Independence; and in this he charted the rights of human beings much more fully than Jefferson did in the immortal but necessarily compressed paragraph in the more famous document. Of the contemporary impact of Mason's Declaration there can be no possible question. Draftsmen in other states drew upon it when they framed similar documents or inserted similar safeguards of individual liberties in their new constitutions. Universal in its appeal, it directly affected the French Declaration of the Rights of Man and the Citizen of 1789. In our own time it is echoed in the Declaration of Human Rights of the United Nations. Writing in his old age, Lafayette said: "The era of the American Revolution, which one can regard as the beginning of a new social order for the entire world, is, properly speaking, the era of declarations of rights." More than any other single American, except possibly Thomas Jefferson, whom in some sense he anticipated, George Mason may be regarded as the herald of this new era; and in our own age, when the rights of individual human beings are being challenged by totalitarianism around the world, men can still find inspiration in his noble words.

Writer George Grant said of Mason: "A rationalist who had little faith in the workings of governmental bodies, Mason fought passionately for the freedom of the individual—citizen or slave; and he was largely responsible for ensuring that protection of the rights of the individual would be such an essential part of the American system."

It is a fitting tribute to Mason that Virginia's largest university, and this School of Law, bear his name, ensuring that America's "Forgotten Founder" in fact is remembered for the magnitude of his contributions to our guarantee of individual freedom. 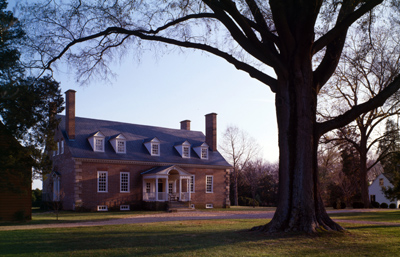 A view of the main house at Gunston Hall, home of George Mason, located
in Mason Neck on the Potomac River in northern Virginia. The plantation
offers an enjoyable visitors' center, and the home is open for tours.